There is no doubt that the number of IoTs will increase explosively.

As the IoT device continues to increase, IoT devices will be faced with the network flooding attack, such as DDoS, more frequently. However, because of its capacity of memory and MCU, nearly most IoT devices are very vulnerable to heavy network attacks and traffisc.

Weakness of these IoT device must be a great opportunity to TOE-embedded MCU, W7500. While TOE under Network attack is to reduce the MCU and memory resources of IoT device, because it is possible to protect the System of IoT device.

What is Firewall TCP/IP offload Engine for IoT? 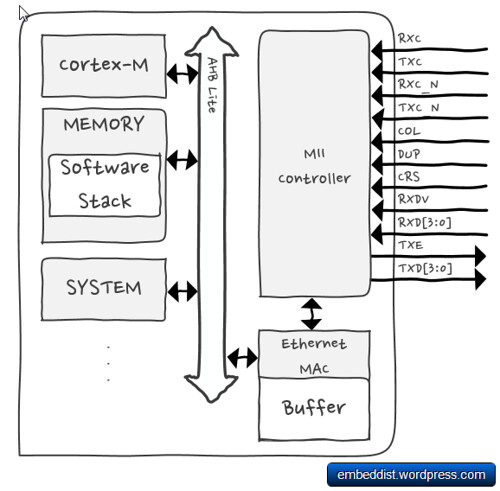 If network flooding attack has occurres, Cortex-M will repeatedly excute process in order to process flooding packets. Therefor, excessive number of TCP requests such as SYN-flooding attacks will overload the IoT device.

On the other hand, the hardware TCP/IP TOE, which is implemented as Hardwired logic from Ethernet MAC Layer to TCP/IP Layer, is able to protect IoT system against network attack under excessive number of flooding packet by making discard flooding packets detected.

Comparison of Software TCP/IP stack and Hardware TCP/IP TOE under the Network attack such as DDoS. 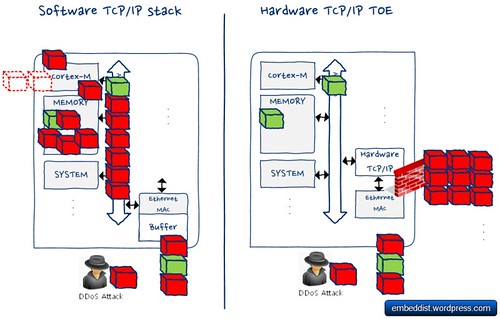 This means that Cortex-M does not have to handle the flooding packet even under Network attack. Further, because the TCP / IP stack processing is performed in TOE, it is possible to save the amount of memory for TCP/IP communications.

These TOE features are not to limited to the Network attack, it is also possible to expect the same performance under heavy network traffic.

How to use iperf

We used the scapy (python library) as DoS Attack. 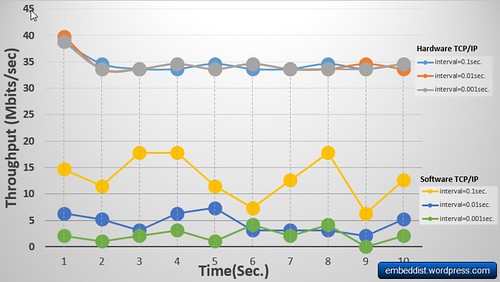